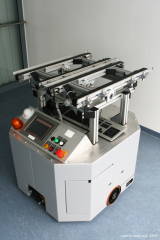 The F5 is a new development and the successor platform for the Leonardo robots. It is a mobile platform produced by Festo Didactic GmbH & Co. KG in Denkendorf, Germany for the Life Science Lab, Surveillance and changeable factory scenario. It is a battery-driven, wheeled, mobile platform with one laser range finder for localisation, navigation and mapping and additional distance sensors to detect stairs or difficult floor passages. The pictures show conveyor belts mounted to the top of the platform to transport and transfer standard Schaefer boxes in a changeable factory scenario. Alternatively the platform can be equipped with a 6DOF manipulator.

I developed the software architecture of the F5 robot. The platform was demonstrated live at the worlds biggest industrial fair Hannover Messe 2009.